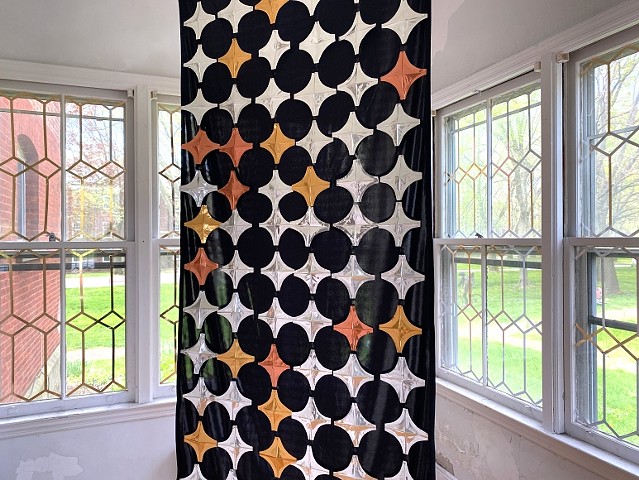 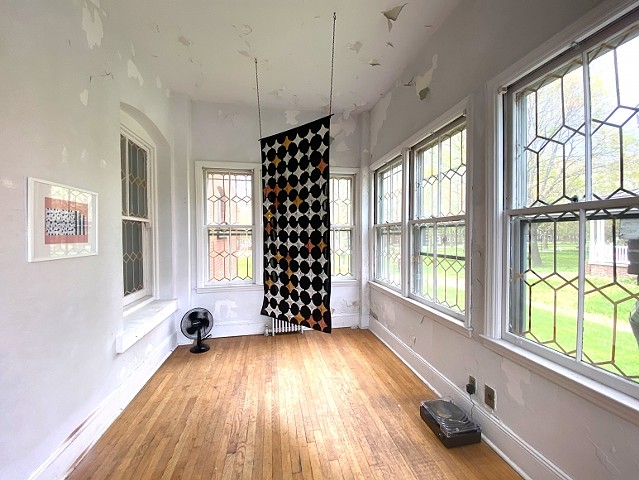 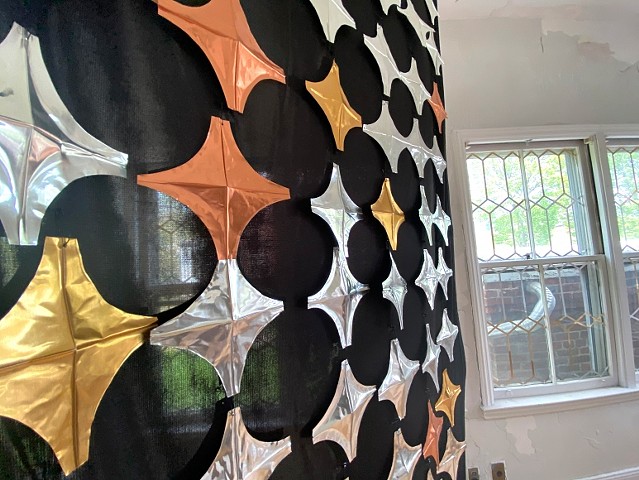 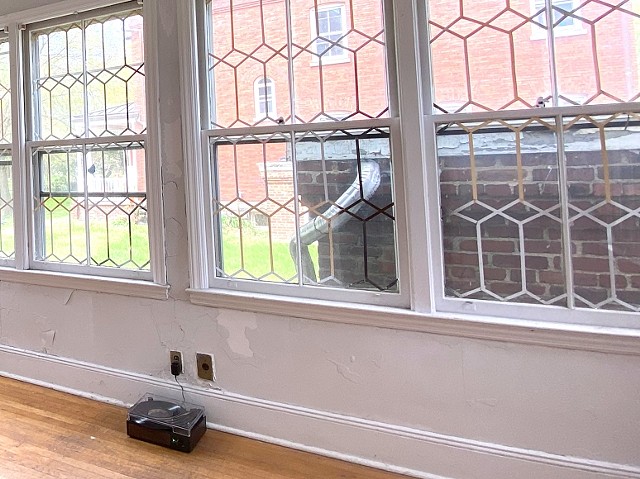 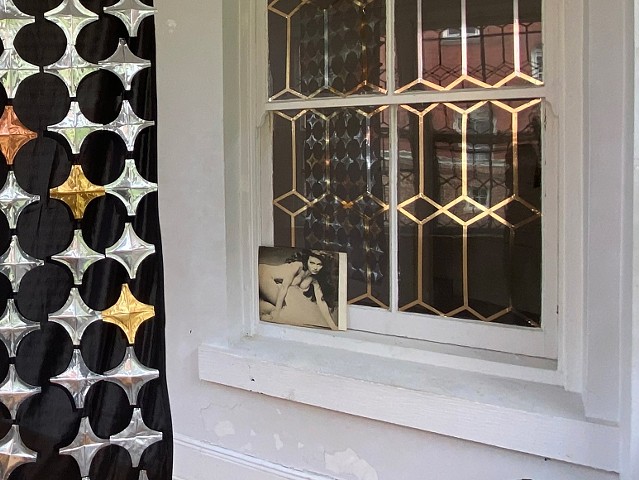 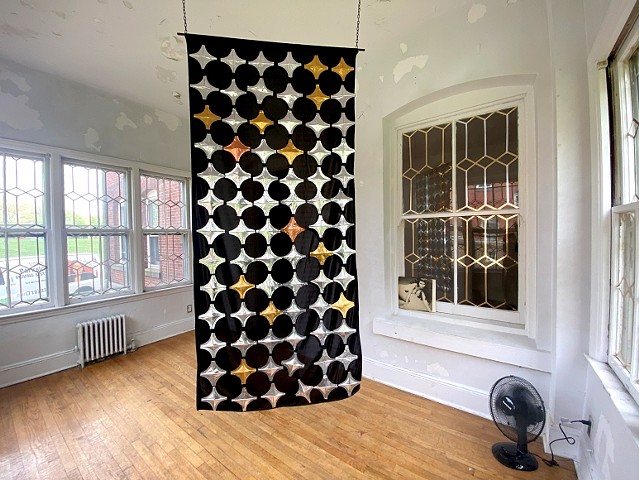 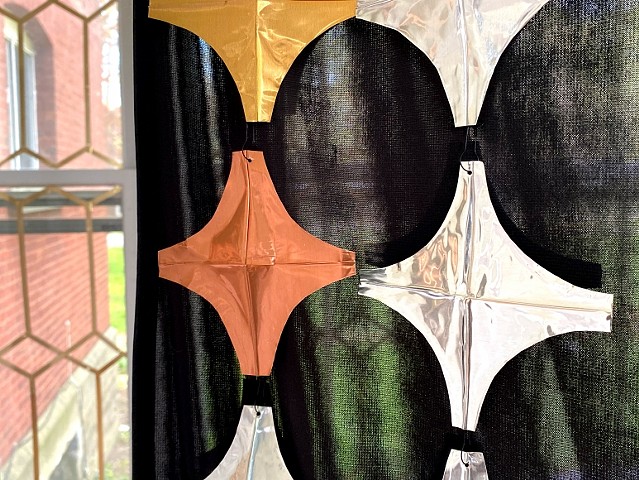 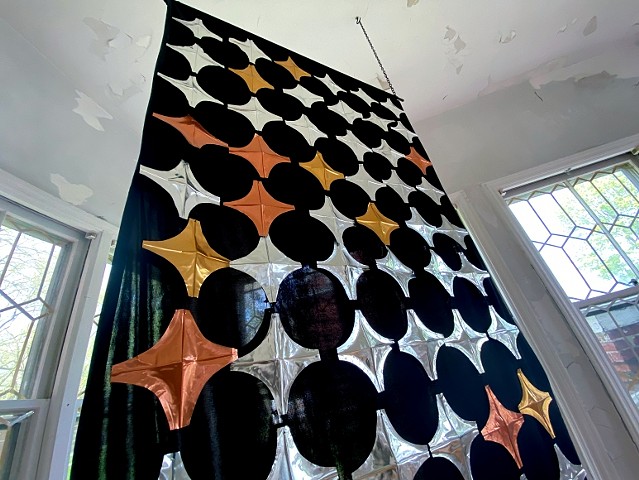 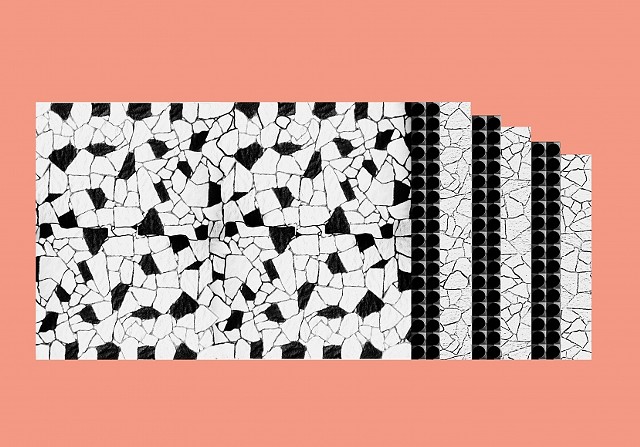 The installation incorporates a new handcrafted textile artwork called “Tropicalamerica 21” suspended from the ceiling, custom vinyl artwork adhered to the windows, and a framed conceptual drawing on the wall, continuing the artist’s practice of creating architectural interventions in spaces that connect her heritage with the particular history of the site where her work is being presented.

The 3x5.5’ fabric and metal flag features 78 4-pointed stars with each star representing a county equivalent entity (“municipio”) of Puerto Rico. This artwork is inspired by the all-black Puerto Rican flag, which was introduced in 2016 as a symbol of independence, resistance, and civil disobedience. In Soto’s rendition, the artist refers to the visual motifs of Puerto Rican vernacular architecture to create a highly graphic original design. The stars are made of soft pushed metal and hang loosely from the fabric, and the flag itself is blown gently by an 18” metal floor fan, transforming the sunroom into a kinetic environment of shifting light and shadow.

On the wall is an example of Soto’s new digital print suite titled, “Casas-Islas | HousesIslands”. These are a suite of 20 conceptual drawings inspired by Puerto Rico’s built environment that specifically consider the idiosyncratic architecture and designs of lower and middle class homes, redeploying those elements into graphic, 2-dimensional schematics. The horizontal shapes allude to the topography of the island of Puerto Rico and some notion of the house as a vessel. In this sense, the work becomes a reflection on states of isolation and the idea of homes as topographical spaces that contain private histories; presenting this body of work in a historic home located on another island adds to the site specificity of the installation.

In the windows Soto has created custom vinyl tape artwork that continues the architectural patterning that appears in the flag and works on paper, grafting the decorative motifs of her homeland onto the historic New England architecture and making it visible from the exterior of the building.

Songs such as “Chevere” or “No Llores Campesino” allude to farmers’ arduous work in the fields, while “Libre Como Gaviota” and “Esta es mi Vida Señores” speak to female emancipation and other timely issues.