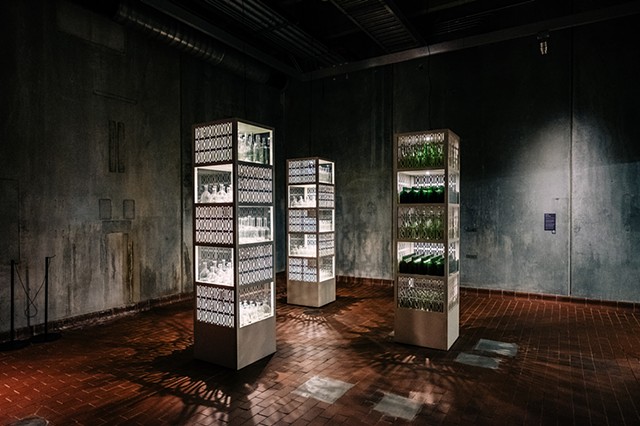 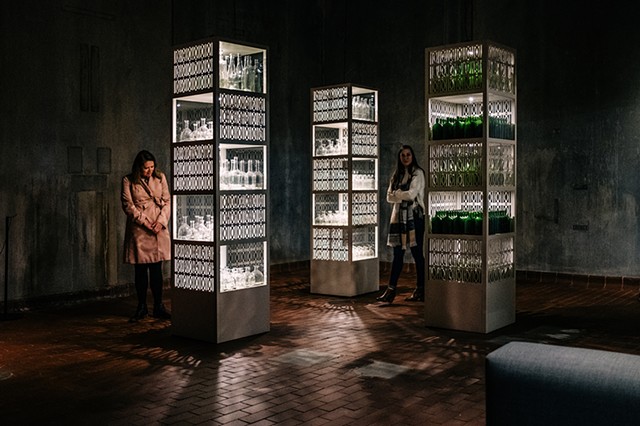 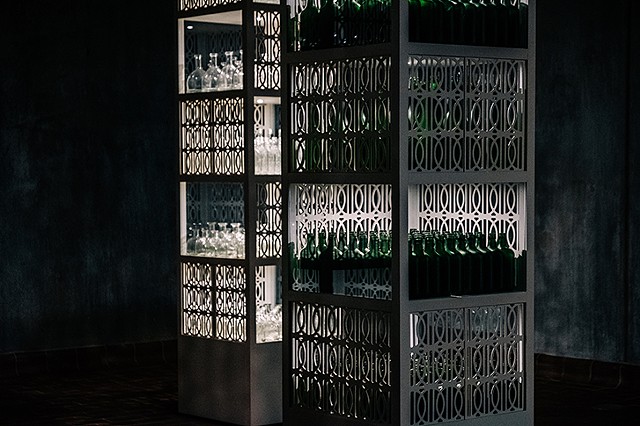 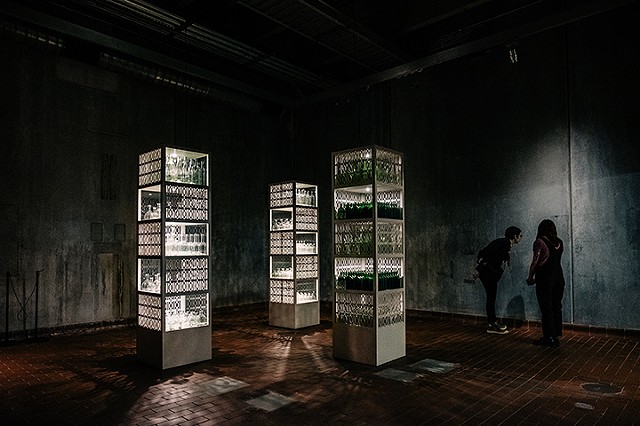 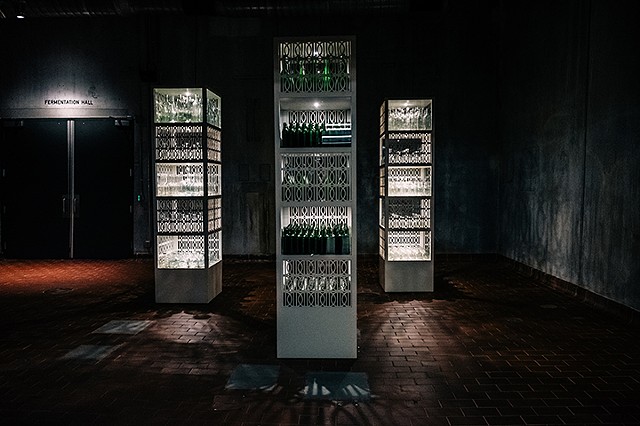 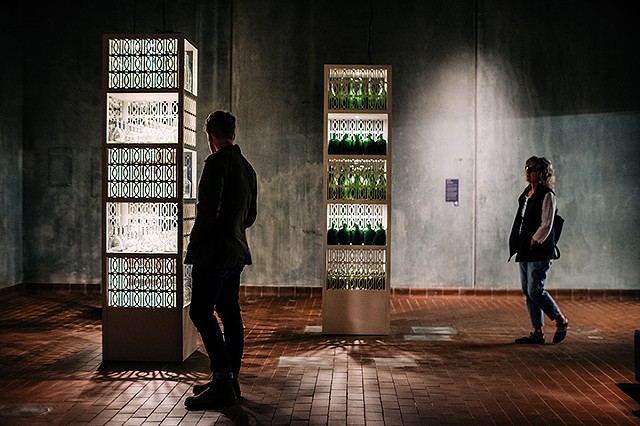 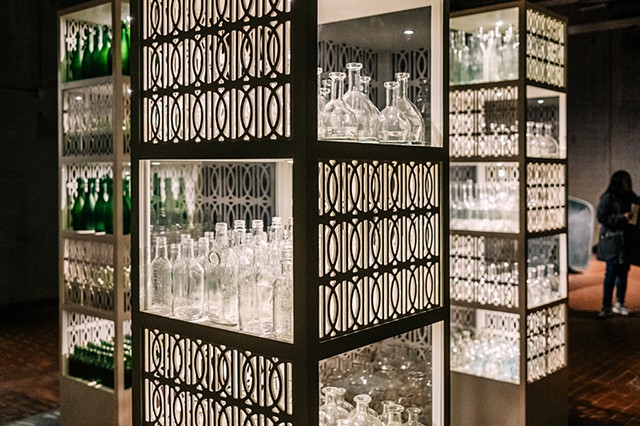 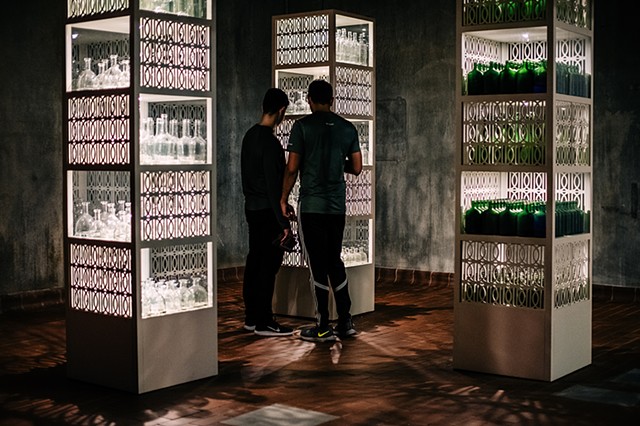 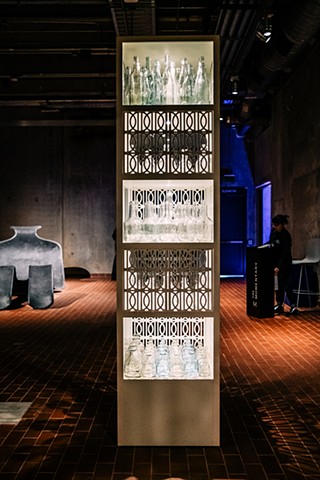 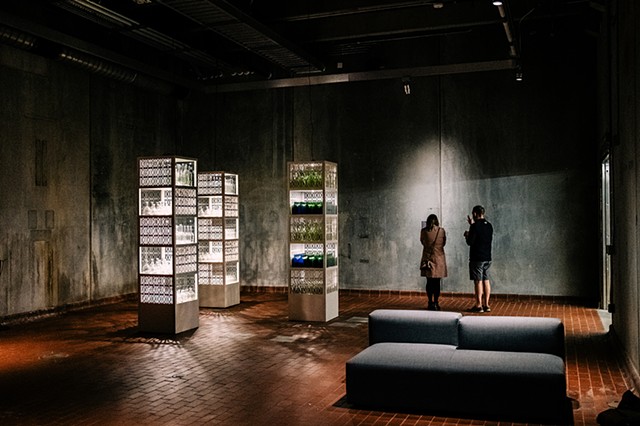 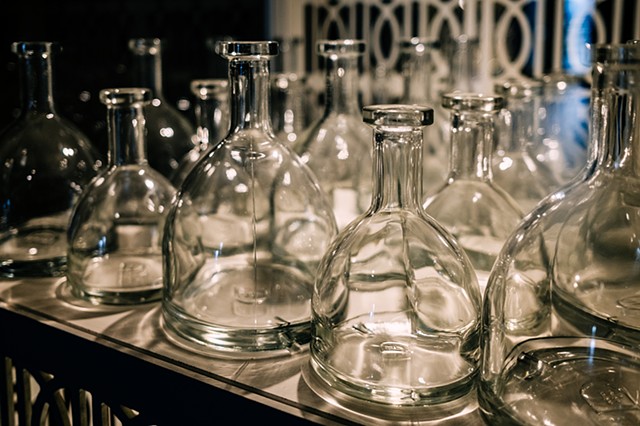 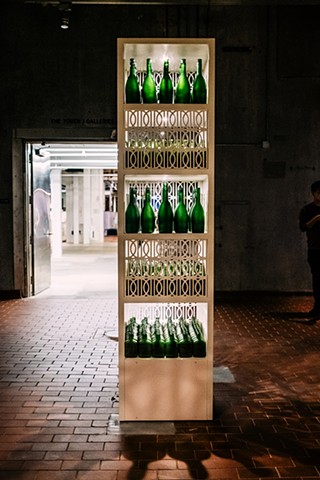 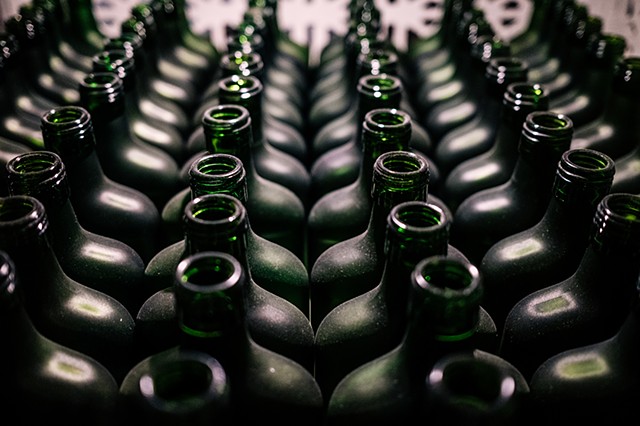 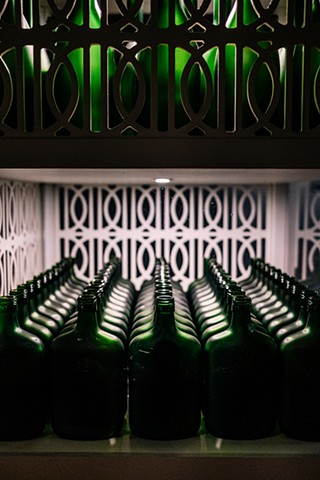 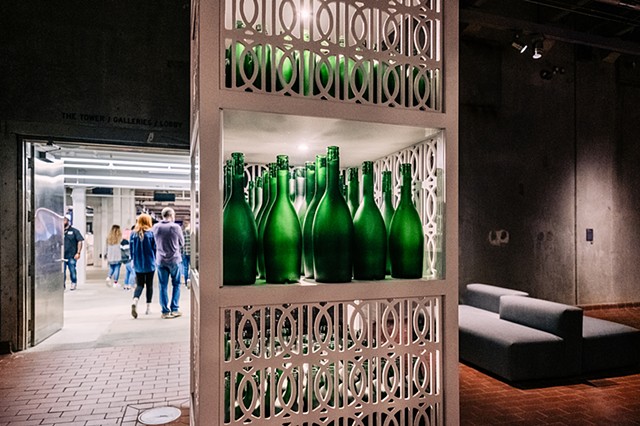 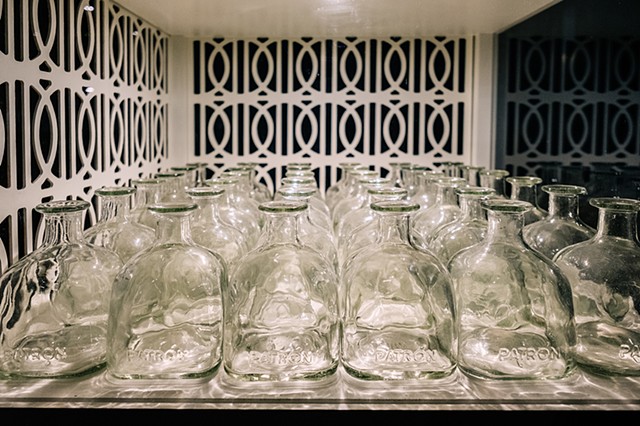 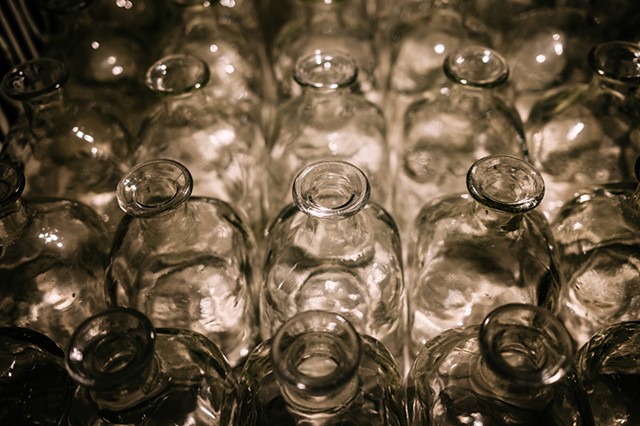 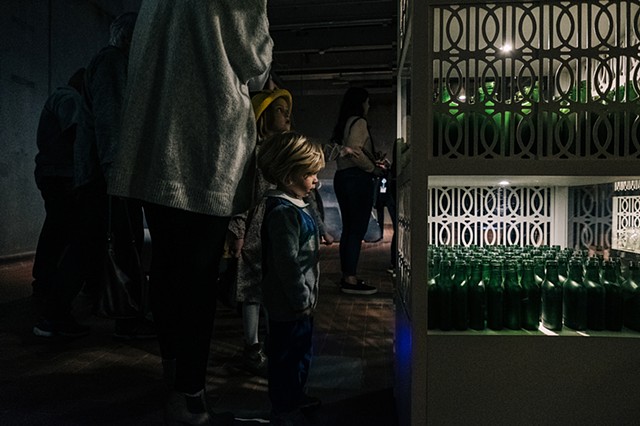 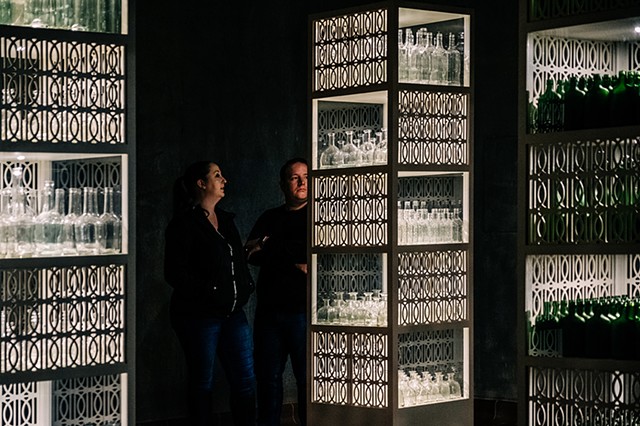 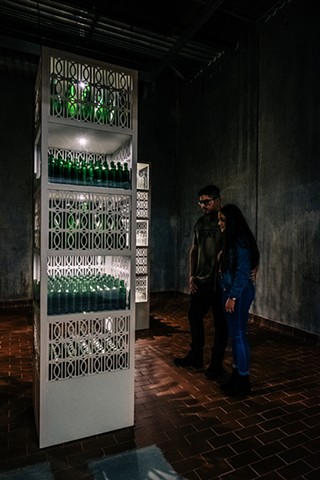 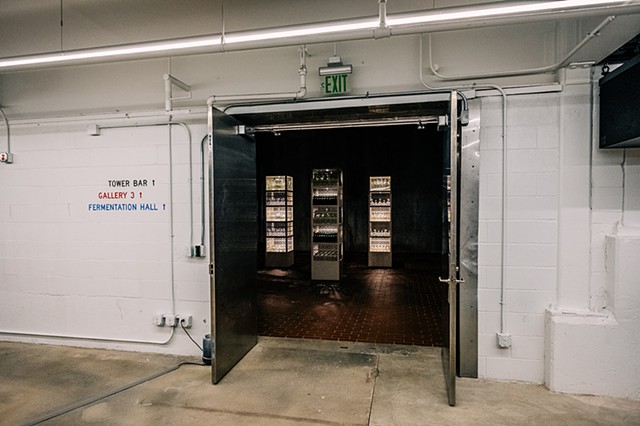 Soto’s Open 24 Hrs. retrieves as artifacts empty liquor bottles scattered over time across the ground in East Garfield Park. There where they lie, the bottles take on new responsibilities. Are they, as Walter Rodney called it, engaged in groundings with their brothers? Because it is most certainly brothers who have left them behind. If so, Soto breaks this masculine discourse by collecting the bottles—interrupting that conversation and initiating another one. Clean, stripped of their labels, and presented as still lifes, the containers are transformed into objects of contemplation.

Cognac is the alcoholic beverage most prevalent among the discarded bottles, an unlikely find in these sites if we consider cognac’s birthplace in Poitou-Charente, France. A region in the country’s Southwest, it is home neither to the Metropole of Francophone Africa nor to the African Americans who found refuge in postwar France. And yet contemporary cognac advertising is grounded in an aesthetic of urban Black masculinity. Cognac’s focus on positioning to Black male consumers dates at least to the early 1980s, when focus groups revealed how closely the product was associated with prestige, quality, status, and affluence. The pitch was rejuvenated in the 2000s as cognac found purchase in hip hop music and videos. Today, outdoor advertising promises inchoate textures of the good life, making patent medicines out of Extra Old varieties community residents may scarcely be able to afford. Remy Martin saw fit to illustrate on its website “How to Drink Cognac” with masculine Black hands (and suit sleeves and shirt cuffs) that telegraph fashionable affluence. But the hands that held the cognac bottles in East Garfield Park before they were cast off have been tasked with the everyday. They have forged their own reckless enjoyment of fermented, aged, and distilled beverages of various kinds.

The liquor bottles in their excess remind the community of their evidence of themselves. They ground the questions that vex Black and Brown community life, particularly in the contested spaces like vacant lots where they are shed. Questions such as: What can we expect from the market? What use can we make of public space? What happens when pleasure is toxic? As litter, the bottles become grounds for debate and often, outrage.

In that regard, Soto’s title, Open 24 Hrs., links the debate and outrage evoked by Black bodies in public space. Because also on a 24-hour clock is the hypervisibility of blackness. Black people are always perceived but not seen. Black people can never just fade into the earth and become part of the scenery—someone is always too busy being outraged by their presence. Black people cannot stand their ground. On the ground these bottles are as ghosts. They do contain spirits, after all—and Soto seems to have revived them to a new life where they haunt the viewer with the complex brew of harms and pleasures these bottles instantiate. At the nexus of social interaction and social disorder, social identities and social inequalities, the still lifes challenge facile conclusions about their origin or future trajectory. In touching liquor to earth, the empty bottles embody a kind of permanent pouring of libation. What do the ancestors hear?

Naa Oyo A. Kwate, Ph.D. is Associate Professor at Rutgers, The State University of New Jersey. She is an interdisciplinary social scientist with wide ranging interests in racial inequality and African American urban life. She has studied topics including the direct and indirect health effects of racism,  fast food in Black neighborhoods, and the prevalence and effects of racially-targeted outdoor alcohol advertising. She is the author (2019) of Burgers in Blackface: Anti-Black Restaurants Then and Now. This short monograph interrogates racist logos, themes, and architecture in restaurant branding, and is derived from a larger book project in progress on the racial and spatial transformation of fast food.